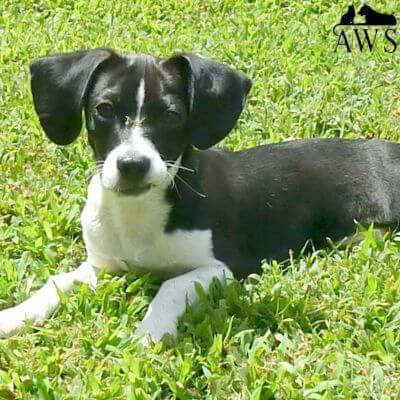 A very thorough run-down of Charlie from his foster family can be read below.

“Charlie is an confident, energetic, outgoing, feisty, little dog. We believe he was born around mid-May, 2015.

Energy/Exercise – Charlie has a high energy level. He is a rugged little pup that loves to play. He enjoys wrestling and playing with other dogs. He is very good on leash and went on several long walks. He is not a lap dog…. He definitely needs some activity every day. He will not be content sitting on your lap watching TV for hours. I found it impossible to tire him out so when you are ready for bed or are busy, just put him away and he settles right now.

Training/Manners – He is still a puppy so he definitely needs training and manners. He will chew on you and other things if you let him, but he responded well to verbal corrections. Initially, he showed some possessiveness over his food and toys. I worked a lot on hand feeding, portioning food into his bowl with my hand, offering treats while he was eating, taking his bowl and giving him something better (canned food). He did great!

With toys, I did a lot of playing with two toys. Throwing a toy for him to fetch and interesting him in the 2nd one. Occasionally, he would work his way up the toy to my hand to try and take the toy or he was careless and would chew my hand… he responded well to verbal corrections for that.

We did not work on his name so feel free to change it.

Housetraining – He was awesome! He was very mature for his age…. Already was lifting his leg, but he never had an accident in the house or in his crate. I confined him to a crate at night and in an ex pen during the day when I could not supervise him. He always slept through the night.

Other Dogs – He got along well with our greyhounds. He can be relentless and got some sharp corrections from the two that were not interested, but he played very well with the one that is very rough and tumble. He will grab ears and lips so ideally the other playmate should be comfortable correcting him if he is too much.

Travel – Initially, he seemed very distressed to travel, but with practice he quieted down and I think with continued trips to fun places that he would love travel in no time. No car sickness.

Grooming – Since he is a pup, we would recommend using lots of treats when you trim his nails so he has a good experience. I trimmed his nails once and he was very good. Lots of wiggling, but when he realized he got a piece of cheese for sitting still and letting me clip a nail, he started to quickly sit still.

Furniture – We did not have him on the furniture, but he LOVED the very soft comforters on the greyhound beds. Loved to burrow underneath them.

Home Alone – He crated great and we crated him when we were not home and would suggest the same for the adopter. He enjoyed Kongs stuffed with canned dog food. We would freeze the Kongs so they lasted longer.

I would appreciate an update. I have lots of cute pictures and videos of him playing with my greyhound that you will love to see. And happy to tell you more of his history. Let me know if you have any questions.”