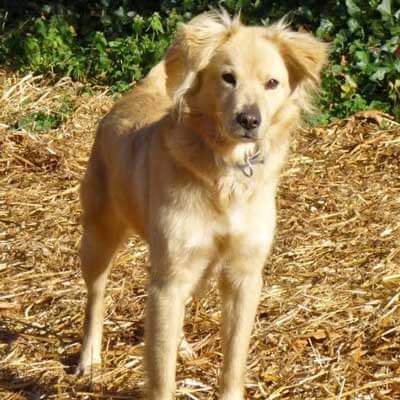 Energy/Exercise – Chevy is high energy and would benefit from an active home.  He showed some retrieving tendencies.  He would fetch a thrown toy and bring it back near me or to a shady spot if it was sunny (so I would go stand in that place).  I got the impression that if I tried to get it from him, he would play keep away so I just ignored him and waited for him to drop it nearby. And then I would throw it for him again.  He seemed to love doing this.  He would play tug with a person fairly gently and was careful with his mouth.

Other Dogs – He plays rough and with his whole body.  He loves to be chased or to play keep away with a toy. He wrestles and is very rough and tumble.  He would be great with another rough and tumble dog that needs a tough playmate.  He shares toys very well and will play tug.

Training/Manners – He does not have any obedience training, but would definitely benefit from it. He obviously has not been walked very much on a leash and needs training.  He is very strong and will try to drag in the direction he wants to go and at times would spin, jump, and pull back… so make sure his collar fits snug!  With consistent practice and training, he will be just fine, but he needs a lot of work currently. He does not know his name so feel free to change it.

He appears to be very sound and athletic. Natural jumper and loves treats.  Might be a good agility prospect.

He needs supervision around the house and I would crate him when you cannot supervise.  He will check out your trash cans and counters so make sure you are right there to let him know he is not allowed to do that.  You might even keep him on leash in the house for a bit so you can really keep him with you and out of trouble.

Housetraining – He did great, but we also did not give him a lot of freedom…. So just supervise to make sure initially.

Travel – We did not have a chance to take him anywhere.

Grooming – he did not love to be brushed so he was squirrelly. His coat could probably benefit from a weekly brushing.

Home Alone – He crated great. I would stuff hollow bones with dry dog food mixed with canned dog food and freeze them.  He loved those!  He did not do a good job of cleaning out Kongs so I stuck with the hollow bones.

His foster family would love an update when he is adopted.