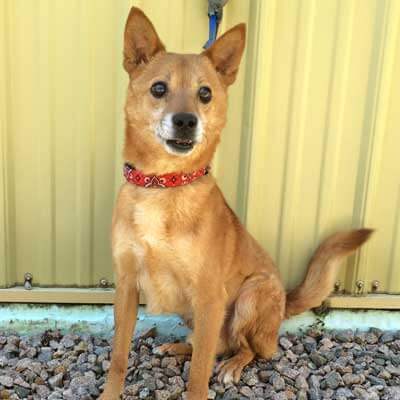 I saw Clancy’s picture on the euthanasia list at a local (Heard County GA) shelter’s Facebook site in early February. His sweet pleading face was irresistible, and although I had a full house of foster dogs, I couldn’t let him die. I went to the shelter to meet him—he was as adorable as expected, and as sweet as his picture depicted!   After I finalized his paperwork, he went off to a nearby vet clinic to be vaccinated, neutered and heartworm tested. Unfortunately, his heartworm test revealed that he had heartworms and I knew my hope of having him to Maine by St. Patrick’s Day was impossible.

Shortly after he came home from being neutered, Clancy stopped eating and seemed very uncomfortable. I was worried he might have acquired an illness from the shelter, so we went to Auburn University College of Veterinary Medicine’s emergency clinic for care (about 90 miles from my home). Based on their diagnostic work up, the veterinarians believed he had a mild case of pancreatitis. He stayed at the hospital for several days, and ate only sporadically for a week or 2 after his release. Fortunately his problem completely resolved and he’s now a happy, healthy boy—eating too much is now more of a problem than not eating enough!! Because of this possible problem though, I would refrain from feeding Clancy “people food” and stick with a regular dog food. After he was completely recovered, we began Clancy’s heartworm treatment.

We decided to do the most complete, effective, safest and longest heartworm treatment regimen, which takes 4 months, plus a month of cage rest afterwards. Several of the medications made Clancy feel a little off, but he never felt horrible. He bounced back quickly from each step of the treatment. His last treatment was at the end of April, and he has been very healthy (though on strict rest) since then.

Clancy is a very sweet and happy boy. He is very smart and loves to be your buddy and to cuddle, though he has a bit of an independent, mischievous streak which is VERY endearing. He is playful with toys and with other dogs—he has been fine with dogs of all sizes and ages at my house though he has been somewhat restricted from playing because of his heartworm treatment (which requires cage rest with leash walking). I think he would be an ideal dog for almost anyone, except someone expecting extreme obedience. I have not had him around children but I believe he would do fine. He has seemed mostly uninterested in cats. He has been a bit of a door dasher so he may need some work in that area—he once dashed past me and got out and catching him again was work, though once I caught up with him, he happily came to me. He does have a fear of thunderstorms, which are common in Georgia. He is very frightened of them, however I have found that if he can find a secure, enclosed place to hide during the storm (I use an airline crate with a nice pillow inside) he is much calmer. I have not tried a thundershirt, though that might be effective for him also. He is very well housebroken and can stay inside throughout a work day without going outdoors.

Of the many dogs and puppies I have rescued, Clancy is among my favorites! He has a wonderful personality and is incredibly sweet. Since I have had him so long, parting with him is very difficult, but I know someone else can give him a better life. I would love to hear from his adopter about his new life and get occasional updates.

Thanks very much for giving Clancy a wonderful life and a new beginning! No dog could be more deserving!!