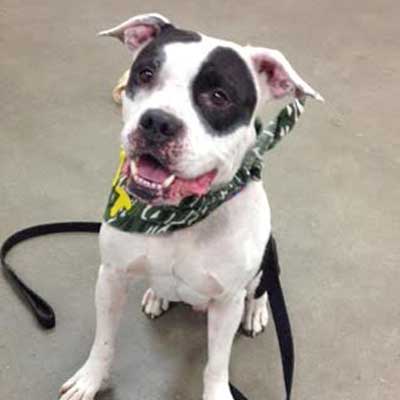 There’s nothing general about this General. Meet General, a 2-year old Pit Bull. General is a friendly, playful, and just all-around super happy boy. He has a blast playing with stuffed squeaky toys and balls. Going for long walks around the neighborhood? He loves ’em. In fact, General just loves being loved, period. No matter what he’s doing or where he’s going, as long as he gets love from his people, he’ll give it right back in spades. General would be happy to share a new home with some other dogs, cats, and active children who can keep up with him. If you’d like to add this loving fellow to your home, then stop on by the shelter today to meet General.

The Animal Welfare Society is fortunate to have volunteers who take adoptable dogs through the obedience classes.  They also spend quality time, playing with, walking, and running the dogs. Here’s what some volunteers had to say about General:

“The General and I have become fast friends, but then again, I am not alone, he befriends everyone fortunate enough to meet him.  He is just one of those guys that makes the effort to befriend you, rather than the other way around.  I call him “The General” because that is exactly what he is.  Last week at the PetSmart Pet Adoption Weekend, “The General” walked down isle after isle of dog food proud and erect as if he was inspecting the troops.  You immediately notice him whenever he is near due to his joy at seeing people and, unlike General Patton, he always has a smile on his face. Anyone who wants a dog to be a companion, but in The General’s case a partner in life, he is the perfect dog to form that relationship.” Malte