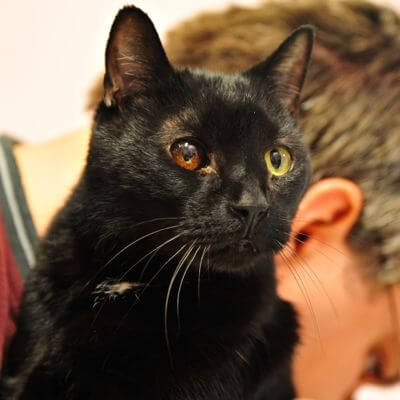 When strays come to our shelter, we rarely ever know what their full story is. In the case of 5-year old short-haired cat Robert Jones, his must be a doozy. He initially came to us with an injured leg, damaged so bad it was thought it might need to be amputated. It wasn’t until he went to have it scanned did the reason behind the injury become clear. That’s when the pellet was found, a .22 caliber to be exact. Somehow, some way, this poor fellow was shot. Thankfully, after it was removed and he was patched up, his leg recovered. Robert still has all four furry paws, even if he may still be tender with one a little bit. Add on to that his discolored eye, most likely genetic, and this kitty has quite a history. Yet he hasn’t let any of it faze him. Robert Jones is a friendly, social, and adorable cat. He enjoys having people come to visit and is always ready for attention. He’s the type of cat who will happily curl up alongside his people for a nap or just to spend time with them. If Robert Jones sounds like the sidekick you’ve been looking for, then stop on by the shelter today to meet him. Who knows, maybe some day he’ll find a way to share his interesting past with you…or at least provide you with a comforting presence after a long day.