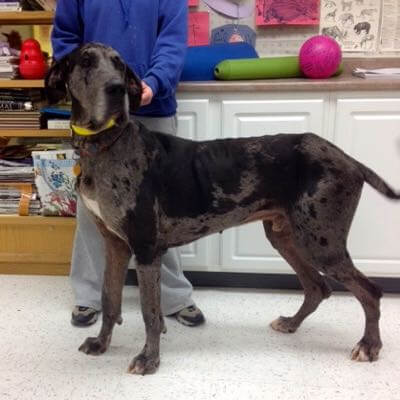 Tate was once loved by a family with a little boy…but his owners could no longer care for him, as they could no longer supply him with as much food as he needed nor the medical care he needed. Tate found himself at the local animal control in rural northwest Georgia, awaiting euthanasia. He was much too special a boy for that fate though, and many people saw that and Road Trip Home rescued Tate.

Here is his story…

When Road Trip Home rescued Tate, he was very underweight and emaciated from his former owners not feeding him properly. The picture above is Tate on the day we got him, he weighed 119 pounds. Tate also had a nipple that had ruptured…it needed surgery right away to be removed. That was done and the tissue was sent off to the lab and found to have cancer cells but the doctor got it all and there were clean margins around the removed tissue. The doctor recommends that if any masses or lumps are found on Tate in the future, that they should be looked at by a vet immediately for diagnosis and possible removal.

Tate came to our home for foster care and in this time he has gained up to between 125-130 lbs. This is still underweight, but it is a big improvement. I feel that once in a permanent forever home, Tate will continue to gain weight and improve. He should weigh at least 150 lbs. Our routine was to feed Tate at least 3 times daily, 2-2.5 cups of food each feeding. As much as we possibly could with our schedules, we tried to feed him 4 times daily as many days as we could, still 2-2.5 cups per day. At our home he was eating Canidae kibble. Every once in a while we would also give Tate a can of wet food too, he loves it. Tate also loves rawhide chews. Tate got lots of rest, lots of food, and lots of love. He is the sweetest boy and will steal your heart. He actually has lots of energy and likes to run. He has a strong spirit and will, but also quite a playful side.

Tate was temperament tested around another Great Dane and he did fine. He was not around any small dogs, but I feel that with careful interaction and introductions he would be fine. Tate was around a 13 year old girl and he loved her. Tate would do fine in a home with children, but obviously his size is something to consider. He loves rubbing up against you like a cat for petting and affection. Be careful because Tate can knock you over just when he is loving on you! Tate is a good car rider, and likes to ride. Tate is a very hard foster to let go of, we grew to love him very much in a short time. It is easy to love him, he is very easy to love.

Please care for Tate dearly and treat him like the gentle giant that he is. He is so deserving of a wonderful home that will cherish and treasure him.

I will be in Maine on June 25th for the Animal Welfare Society and Road Trip Home adopted dog reunion, and I would love to be lucky enough to see Tate there.