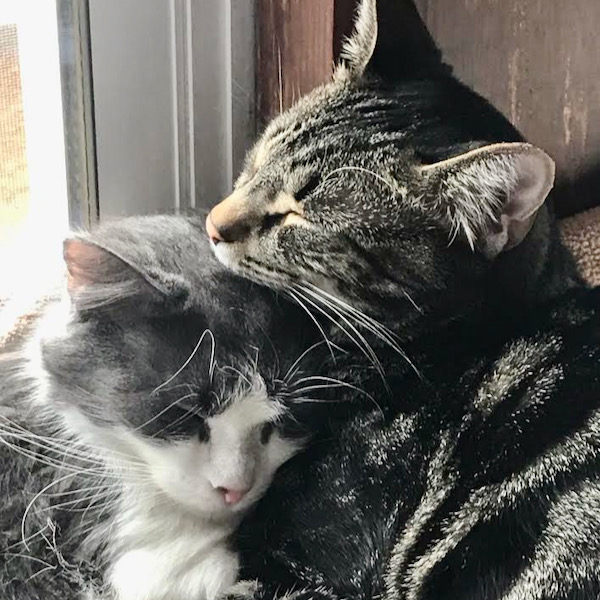 After losing my beloved cat in April 2020, I thought my heart would never heal enough to allow another to fill it. Salem, age 17, was my entire world. He was my first pet as an adult, although our house was filled with pets growing up. My best childhood friend told me about two kitties that had arrived at AWS from Macon, Georgia from a foster program there. It had been six months since Salem crossed the rainbow bridge and I slowly began to think that perhaps adopting two kittens would provide each other good companionship. I went up the next day and fell in love with both, a female and male. The rest is history!

Clover (Tibet at AWS), a female, is a petite medium hair gray and white sweetheart, who knows my presence anywhere in the house. She is smart, independent, attentive to the details of household activities and loves gazing out the window at birds and the occasional bunny that visits. Her favorite toys are her strings.
Nutmeg (Lama at AWS), a male, is a short haired tiger/ tabby with unusual markings. He is a lovable “gentle giant” and incredibly athletic, often jumping three feet off the ground to catch his mice. He is a chaser and hunter and a “foodie” that has his mother losing sleep at 3:30 AM with is demands for breakfast. We are working on it! He is a lap sitter and often positions himself to be held like a baby. He is definitely a character.
Both are great foster mates together and love to curl up with one another.