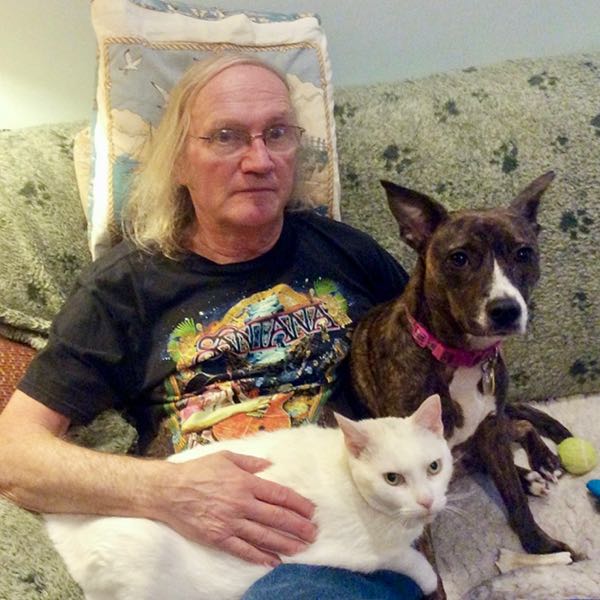 We adopted our cat Daisy (formerly Bonnie) from AWS almost 14 years ago, and she loves to be the boss of the house.

When we adopted our dog Zita (formerly Gaia) on April 14, 2018, she was frightened and nervous. She had been rescued in Puerto Rico by Love 4 Satos volunteers shortly after hurricane Maria. Zita was rescued with her sister Kaylee (now Penny, adopted by another family), and the foster mother in Puerto Rico told me the pups were petrified of people at first, and she could not even pet them. She, along with her dog Summer, fostered the pups for three months.

When Zita came into our house, a frightened little pup, Daisy took her under her feline protection and care and set to work making Zita feel loved and secure. Zita was so frightened, at first we had to carry her in and out of the house for her to do her business, and she was constantly afraid that we’d either abandon her outside or give her away.

We took Zita to a shy dog obedience class at AWS in May/June of 2018. The first class Zita would not even get out of my lap, but with each class she reached a milestone. Small steps were like a giant leap for her. Zita went on to take Basic Obedience and other classes at AWS. She was not always the star of the class, but she has gained so much confidence that last fall, when Zita and I were in a different AWS class with Lisa, the shy dog instructor, tears came to her eyes as she said, “This is not the same dog!”

Zita continues to grow in confidence and joy, and Daisy continues to be her be her best friend. So now we have two lap “cats”! Our sincere thanks go out to the all the AWS trainers for all the patience and support they have shown to us and our beloved Zita.