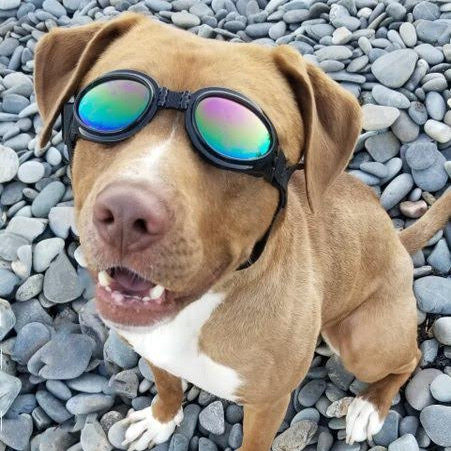 I adopted Houdini from the No Paws Left Behind program on July 13th, after I lost my beloved Caesar (who I adopted at AWS). I had Caesar for almost 10 years before he passed away. I wasn’t looking for another dog–ok, maybe I was–but when I went to drop off some of Caesars food and toys I couldn’t help taking a look at the dogs for adoption. I saw Houdini was struggling a bit being in the shelter and he looked very stressed out. I had passed over him the first time because he was barking and showing his teeth and I thought he was being a little too aggressive. However, as I was talking to a trainer out in the lobby, I noticed a picture of a dog, exactly the size I wanted. I inquired about THAT dog and found out it was him. So I went back and took another look; took him for a long walk, played ball with him. He seemed so different outside that environment. I decided to adopt him. The first few months were rough. We were both getting used to each other and he had a few behaviors I was working with him to correct. After about 4 months he started to settle down and began to trust me. We tried doggie daycare but it didn’t work out so well with him (maybe it was too soon from getting out of the shelter). I am happy to tell you though, that a year and a few months later, he has come out of his shell and he has made a lot of friends at his new doggie daycare (20 to be exact). He summons the neighbors when he sees them to come pat and play with him and every morning and night he can’t get up or go to bed without his daily rituals: belly rubs – or tickles if he is being a grumpy dog- and a pup-muscle massage. He loves to snuggle and he is a loud snorer! He got a teddy bear for Christmas and he loves to prance around and show everyone. He is a big love bucket although he still intimidates some people. His nicknames are Houdini-beanie and Houdini-marshmallow. I love him so much. We do Selfie-Sundays every week and sing-alongs when the neighbors aren’t home. He’s filled my heart with so much joy and I thank God for giving him to me to care for every night.