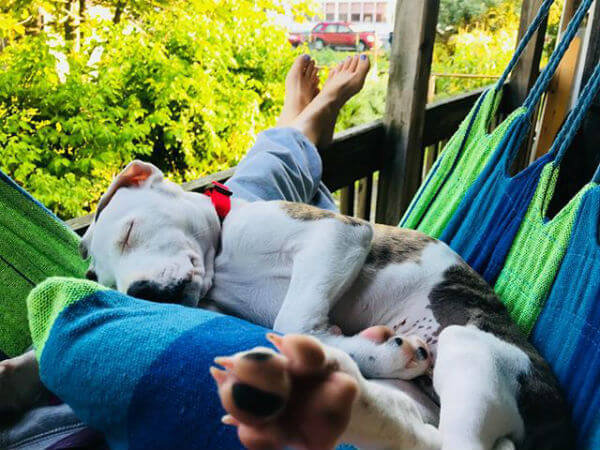 I wanted to take a moment to say thank you for giving us an opportunity to add to our family! A few weeks ago we adopted Miek, and although I’m down two pairs of heels and 3 pairs of flip flops, we’d adopt this sweet boy all over again! From the moment I laid eyes on him I was in love,  I knew we had to have him. We had been to AWS a few times and left with children heartbroken because the puppy they fell in love with online and we went to visit had been adopted. How ever I reminded them, when it’s meant to be, it will be! And Miek is proof of just that! He loves cuddles and his naps, as well as basking in the sun, playing in the kiddie pool, walks/runs and just playing a good game of run and I’ll chase you. We’ve learned that he must be a natural born hunter because not only is he super ridiculously fast but he can sniff out anything. Although he loves walks on the beach he’s not to fond of seagulls, smaller birds though he watches like a hawk. He loves car rides and everyday when we wake up in the morning he HAS to greet us individually, it’s the cutest and most best part about adopting him! He is fun and funny. We have a wrap around couch that we stand and run on, yes I said stand and run on, but he loves chasing whom ever is willing to play with him. He’s had numerous baths which he’s not fully ok with yet but he does love being blow dried after, he’s spoiled! Oh and he loves carrots and digging up our garden. We love him and we are pretty sure he loves us just as much! We will keep you updated in the future as well. Again thank you for making our family complete!