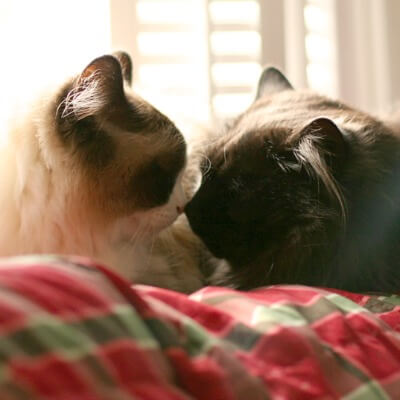 I adopted Nipsey (then named Swizzle) along with his adopted sister Sophie (Liberty) in 2003 from the AWS. While initial introductions we interesting, they became inseparable. Whenever I came home, wherever Sophie was napping, Nipsey would be right next to her. Sadly, we lost Sophie to cancer a few years ago at maybe aged 12. Nipsey is still doing really well though, even though he is getting up there in age. By the adoption records the vet has, they estimate his age at about 18 years, though I’m suspicious that he is a bit younger. Nipsey is a very social guy who follows me around the house and is extremely talkative. He spends most of his time napping in sun spots or in pillow forts, if a lap in unavailable. He occasionally steps outside when the weather is nice onto the porch to watch the chipmunks, soak in some fresh air and munch on the catnip plant. While losing Sophie was really hard, adopting these two souls was one of the best decisions that I’ve ever made.