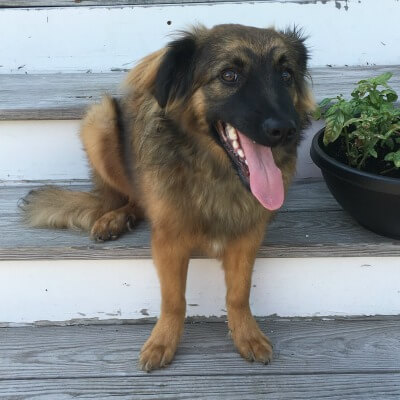 Back in June my boyfriend and I adopted Riley (he was Vanilla Ice), and I wanted to share his progress with you!

When we just got Riley he was incredibly timid. He could not look us in the eye, was terrified of any little noise, and would sit in one corner of the living room at all times. He had a crate he would sleep in at night and we would have to pull him out of the crate just to get him out – he was scared everywhere else in the house. The vet told us that Riley was likely abused in his past.

However, we signed Riley up for obedience class, socialized him at the dog park and took him to visit our neighbors daily. Now, in only a few months, Riley roams the house at will, making us move if we are in his spot on the couch. If he sees other dogs outside, he whines so we will take him out to play with them. He loves his new sister Cali (our cat) and loves to chase her around the house. He is really a whole new dog. We weren’t sure if we could ever make him feel comfortable in our home, but he warmed up to us fairly quickly, and we can’t wait to see how much more progress he makes!

He has been the most wonderful addition to our family and we are so glad we adopted from you!!