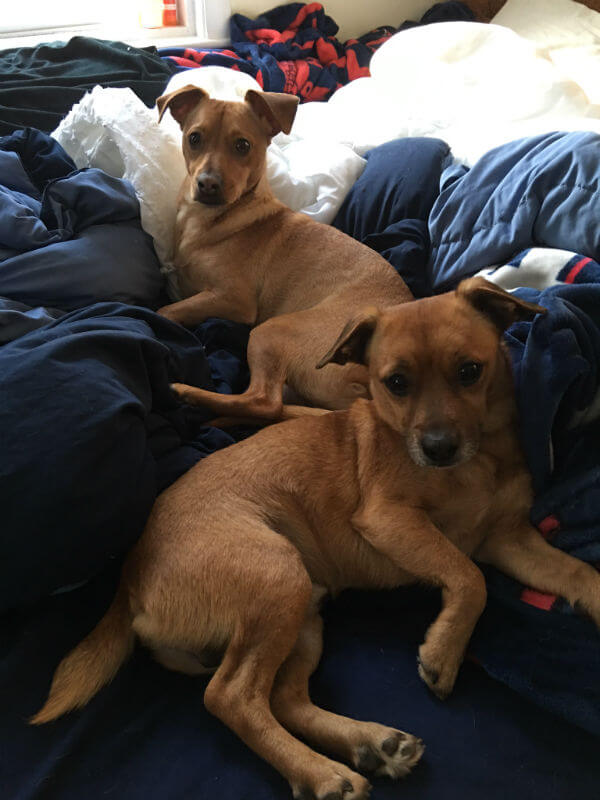 I adopted Spike in early December, when he had not been in New England for too long. He was afraid of just about everything, especially the snow. He adjusted well to his new home. After a week or so, I had to track down his foster mother from Mississippi to find out that he was neglected by his previous owners. Truly heartbreaking. Now, just three months later, Spike is a completely different dog. He loves to play and jump in the snow. Being outside is his happy place. Anything that involves running, walking, or playing fetch are his favorite. He is such a snuggle bug as well.

On Sunday I adopted yet another dog, Scrappy. I’m not too sure on his background yet, but in the last few days he has adjusted so well. He loves his brother and they cuddle together on the couch and in bed at night. He’s also from the south and is not quite sure about the snow and cold yet. He’s a little older, so when Spike wants to play, he gets a little annoyed, but just sleeps it off. His favorite thing so far is finding his way under the covers at night to sleep cozily next to me. He is honestly the biggest snuggle bug I have ever met, his big puppy dog eyes just wait for you to look at him, and when you make eye contact he jumps right into your lap and starts to give kisses.

My heart is so full having these dogs, and being able to give them a good home. Showing them what love is, and that they are good boys is my favorite thing in the world. I am so very happy to be a dog mom to the best pups in the world!