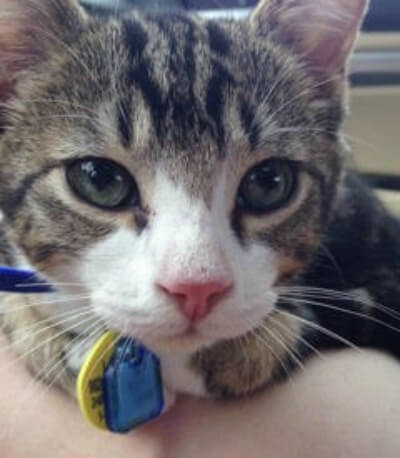 On September 10th, I walked into the Animal Welfare Society to visit the animals as I often do and wondered whether I would find the cat that I just knew was right for me. I certainly did, and I knew it instantly. I believe Zip, as well as his brothers Zag and Zig, had just been brought to the rescue that morning from their foster home, and they were understandably still adjusting. While I was reassuring Zag and Zig, who had been resting together, little Zip stole me away as soon as I saw him. He was quiet and laying low in this new environment, but he was curious and ever so sweet. I already determined that I would be adopting him, but it took awhile before I could bring myself to leave him long enough to fill out the paperwork.

Along with Zip came a very kind and thoughtful letter from his foster parents, whom I have to thank immensely for the invaluable love and support they showed these kittens during a vital time of growth. From their input, I was able to make sure Zip’s first few toys were his favorites. He sure does enjoy his crinkle toys! I made a tunnel out of brown paper bags for him and he loves running through it and pouncing on it for the crinkle sounds. He also loves feather wands, and he is so interactive with them.

I am a relatively new resident to Maine (for the purpose of attending graduate school), and nothing has helped me feel more settled and at home than adding Zip to my life (Incidentally, while I won’t forget his time as Zip, I hope those who raised him won’t mind my changing his name to Keaton. I have long been a fan of the Zelda / Fire Emblem series for those familiar! Additionally, there is a theme among my family pets with K names). He is unbelievably cute and full of personality, and he makes me smile with everything he does: from laying in the sink, to insistent nose boops, to losing his own mouse toy by sitting on it, to plopping on my laptop and inadvertently turning it off, to stretching out on my bed while he sleeps at night, to watching out the window from his cat tower… I could go on 🙂 He means a great deal to me, and I cannot wait to grow with him over the coming years. I will be enriching his days as much as I can, and he has already been doing the same for me. My sincerest thanks again to his wonderful foster family and the amazing people at the Animal Welfare Society!