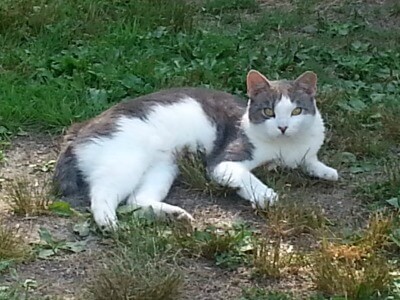 I’m writing to you to tell you of our experience adopting a barn cat. In March 2016, we adopted a barn cat, “Jerome” from the Animal Welfare Society. We discovered that our shed was overrun with mice and squirrels who were damaging our stored items. After reading an email from AWS about natural rodent control, aka, barn cats, I called the shelter to learn more.

Considering adopting an outdoor cat was new territory for us. All of our pets have lived comfortably inside the house with us and we had many questions. After talking at length with some of the helpful adoption coordinators at AWS, they assured us that we were helping by giving a home to a cat who was unadoptable in the traditional sense. Barn cats are independent and only slightly socialized and wouldn’t be happy living confined as a house pet. They are neutered with a complete set of shots too.

I visited several times and one cat caught my eye every single time. He could have been a twin to a cat I adopted over 20 years ago from the AWS. Of course “Jerome” had to be the one. I brought him home and kept him confined in our shed for over a month as recommended. We re-named him Remington. He was incredibly shy and skittish but eventually his stomach won out and he began greeting me for food each day. He began to get a little bolder and let me pet him on the head. And I began to notice that the mice weren’t causing any more damage. Turns out Remington is a good mouser!

I let him out of the shed and held my breath wondering if I would ever see him again. Would he actually stay around? Yes! Not only does he stay around, but we now have an escort wherever we go in the yard! We are greeted every morning when we go outside with purrs as he winds around our legs, begging for breakfast. When we go outside to work in the garden, Remington is there overseeing the progress. In the evenings when we sit outside, he likes to sit on the ground near our chairs and just chill with us. When we had a Fourth of July party, he hung out with the crowd staying out of reach, but watching. He even let a couple of guests pet him on the head.

I had imagined that a barn cat would be an elusive presence that we only saw once in a while and probably most of them are. Instead, Remy has become a cherished member of the family. He has gotten quite friendly and seeks attention from us. He makes us laugh as he chases bugs and plays games “stalking” before leaping out of the grass to startle us. He is a wonderful, silly and comical little guy. Our gardens have never looked so good because we have spent more time outside enjoying Remy’s company. And we look for our daily “present” from Remington which he proudly puts in front of the garage. Mice, chipmunks and moles are no match for his hunting abilities.

My husband is diligently working on convincing Remington to become a “heated garage cat” instead of a barn cat for the winter. We’ll see what he decides.

Are all barn cats as amazing wonderful as our Remington? I’m guessing probably not. We definitely hit the jackpot. But for anyone who would like some help with rodent control and maybe a little companionship too, I hope they will consider adopting a barn cat. They all deserve a home.